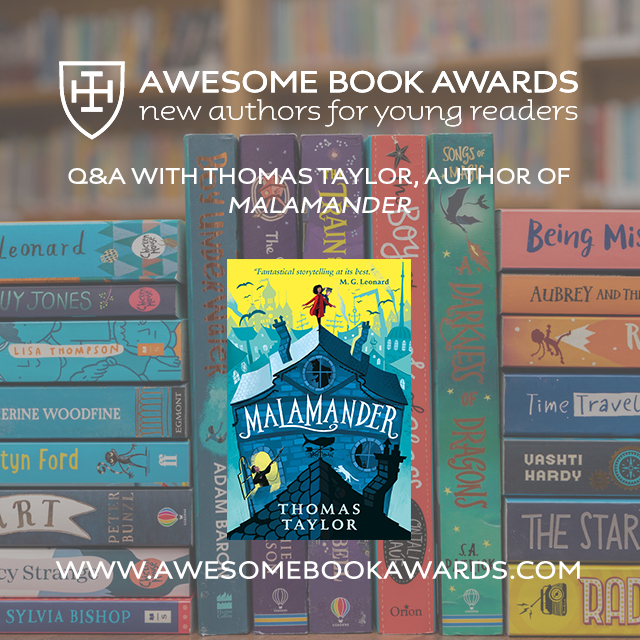 Where did you write Malamander?

On my desktop computer, in my work room, in my house by the sea, on the south coast of England. But it started with daydreaming on beach walks.

Moving to a seaside town and living there all year round, and discovering that these places have a secret life in the winter. When the tourists are gone and the ice cream stands are closed, and the weather closes in, the only people who come to visit have a good reason to be there. Or a bad one. Also, the winter is the best time to beach-comb the strange things revealed by the wildest tides.

How long did it take you to write Malamander?

I spent about two years working on it on and off, and then another six months or so revising and editing it for publication.

What does a day in the life of Thomas Taylor look like when you’re writing and/or illustrating?

Every day starts with getting my children off to school, before taking the dog out for his walk. My dog is energetic, and needs several hours of exercise a day, so this provides a good excuse to be on the beach. I struggle to be very creative in the mornings, but I hope to be writing by midday, and putting in a good few hours. A thousand usable words a day is a good day. Drawing is a bit different, and I can work in the evenings and late into the night if I have illustration to do. Biscuits and coffee feature throughout all this, far more than they should.

We love your clever use of names of people and places which relate to the sea, especially Jenny Hanniver and Amber Griss! Did you have a list of character names before beginning your book, or did they spring to mind during the writing?

Thanks. The names became very important, but most had to come to me as I worked. In my family, we have called sherbet lemons ‘Herbert Lemons’ for years, so that name was a gift. It took a lot longer to remember about parma violets, to get Violet Parma. After that I wanted everyone else in the book to have a name associated with the seaside or beach or ocean in some way. Jenny Hanniver was another gift, this time from history. I was stuck for a name for the hotel receptionist, and it was my son Benjy who suggested ‘Amber Griss’.

Was it a conscious decision on your part not to do the cover illustration of your book? Did you have any input to the design of the wonderful UK cover by George Ermos?

I initially expected to do the cover art myself, and even started some sketches. However, it’s a long time since I’ve done any cover art, and I’m very rusty with colour work. It was a relief to have George Ermos on board, to take that on, leaving me to work on the line work inside the book. I’m much more of a pen and ink line artist these days. I did have some input into the design though, but George is a whizz with colour. That yellow sky!

It was announced in May this year that Josh Cooley, director of the Oscar-winning Toy Story 4, is set to write and make his live-action directorial debut with Malamander for Sony Pictures.  Have you any more news on this e.g. casting, location and are you hoping to be involved in some way on the movie?

I’ve had some direct contact with Josh, who has asked lots of searching questions about the background to the story, and who seems very passionate about Eerie-on-Sea. I don’t have much news though, as Hollywood has been at a standstill for months because of the pandemic. I have just heard that activity is resuming once more, so fingers crossed! I would love to be involved, especially if the filming takes place in the UK. I’d quite like to eat fish and chips in the background during a Seegol’s Diner scene.

Awkward, shy, stammering and full of daydreams. Little has changed.

Art. I was good at it (or so everyone told me).

The Girl in Wooden Armour by Conrad Mason (out April, 2021). Also The Vanishing Trick by Jenny Spangler.

Probably Charles Dickens, because he was such a great observer of people, and of their predicaments.

What advice do you have for young writers and readers?