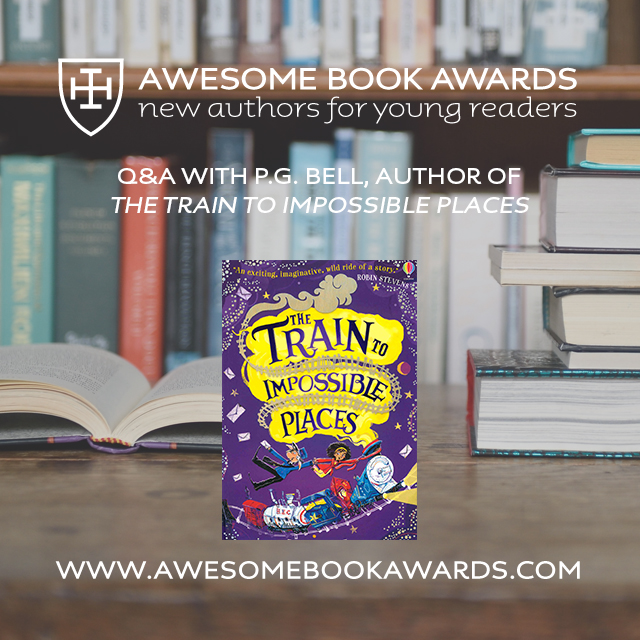 Where did you write The Train to Impossible Places?

I wrote it in a local coffee shop (where fellow children’s author Claire Fayers and I still get together to write every week), and at work in Cardiff University’s physics and engineering library. I was a part time library assistant there, and in the evenings after all the students had gone home for tea it was usually quiet enough for me to settle down and work on the manuscript.

It started as a bedtime story for my eldest son who, out of the blue one evening, asked me for “a brand-new story that no one’s ever heard before.” I had to think quick, so drew on my own favourite childhood stories such as The Magic Faraway Tree, The Worst Witch and anything by Roald Dahl. I’ve always loved stories about exploring new worlds, or turning our expectations of the everyday upside down. My son and I both enjoyed the story so much that, after a year of revising it in my imagination, I finally decided to try writing it down. The final book is bigger and more complex than that first bedtime story, but all the original ingredients are still in place.

The pace of your book is rather like an express train; how long did it take you to write The Train to Impossible Places?

The first draft took me exactly 100 days! I’m not normally that precise but, for reasons that escape me now, I kept a log of my daily word count when writing it. It took another four or five months to edit once it had found a publisher, but it was a remarkably quick process. I think having already told the story out loud, and then having a year to think it through, really helped the writing process.

Letters form a major theme which is something that is rather alien to the younger generation in the electronic world we now live in. Was this a worry to you whilst writing your story? Do you get any letters from your readers?

I used to love sending and receiving letters when I was young. I had several friends across the country (and one or two abroad) that I wrote to pretty frequently. But then the internet arrived when I was 18 and it all stopped. The thing is, we were all so excited by the new technology at the time that we hardly noticed. It’s understandable — communication became almost effortless overnight — but I think we need to fight to keep a place for letter writing, which is so much more personal than e-mail or Instant Messenger’s. So, I’m thrilled that some of my readers have started writing to me. I receive some lovely correspondence, and I always reply.

Because trolls are really versatile creatures, and come in all sorts of shapes, sizes and personalities depending on what sort of story you’re telling. Are they big and mean and stupid, like in Harry Potter and the Philosopher’s Stone? Or are they small and wise, like the trolls in Frozen? Are they made of stone? Are they appealing or fearsome? The one thing that all trolls seem to have in common is that they’re a bit lumpy and strange. They’re the sort of creatures who will always have dirt under their fingernails. What better creature to be driving a gigantic train?

What does a day in the life of P G Bell look like when you’re writing?

It’s flexible, but I always start with the school run first thing in the morning. Once I’ve waved my sons off in the playground, I’ll head home and make myself a large pot of coffee, then sit down and start writing. I usually aim for about 2000 words per day, and that takes me a few hours. I’ll break for lunch, then catch up on admin, e-mails and whatever bits of housework need doing before the boys get home from school.

I was a daydreamer — easily bored, easily distracted and with my head full of stories, even before I started writing them down. That’s thanks to my parents, who gave me a love of reading from an early age and never stood between me and books.

I had lots of favourites, but the ones that have stuck with me are The Magic Faraway Tree by Enid Blyton, The Worst Witch by Jill Murphy and Trouble for Trumpets, which is a lavishly illustrated picture book by Peter Cross and Peter Dallas-Smith. It’s not terribly well known, which is a shame because I think it’s a masterpiece.

I’ve always loved to draw, so art was my favourite subject. It’s just another way of telling stories.

I’m reading three right now: North Child by Edith Pattou, which is an epic Middle Grade fairy tale about a teenage girl’s quest to save a talking polar bear from a terrible enchantment; Wundersmith: The Calling of Morrigan Crow by Jessica Townsend, which is the second in the Nevermoor series and just as much fun as the first; and Lobbying for Change by Alberto Alemanno, which is all about grassroots activism and how normal people can impact the society around them.

Diana Wynne-Jones, because I only started reading her books a few years ago and they’re simply wonderful. She’s no longer with us, sadly, but I’d love to be able to sit down and chat with her about her approach to storytelling. Check out Howl’s Moving Castle if you’ve never read any of her work before!

I try not to write books about messages if I can help it, because they can start to overpower the story. That’s not to say the book doesn’t raise lots of important themes and questions, but I leave it up to the reader to draw their own conclusions about them. As long as the book brought them joy, I’m happy.

The first bit of advice is to read often and widely — don’t just stick to the sorts of stories you know you enjoy, but give yourself the chance to be surprised by something new. Your favourites will always be there for you to revisit and if you find you’re not enjoying a new book, abandon it and move on to another.

The more you read, the more you’ll understand how stories work and the more you’ll want to tell your own. There’s no right or wrong way to do it, you’ve just got to find the method that works best for you. You might be a planner or an improviser, you might write in order or jump around from scene to scene. Just make sure you write a little every day and don’t stop until your story’s finished.

Click here to access reading resources and book club activities based on The Train to Impossible Places.