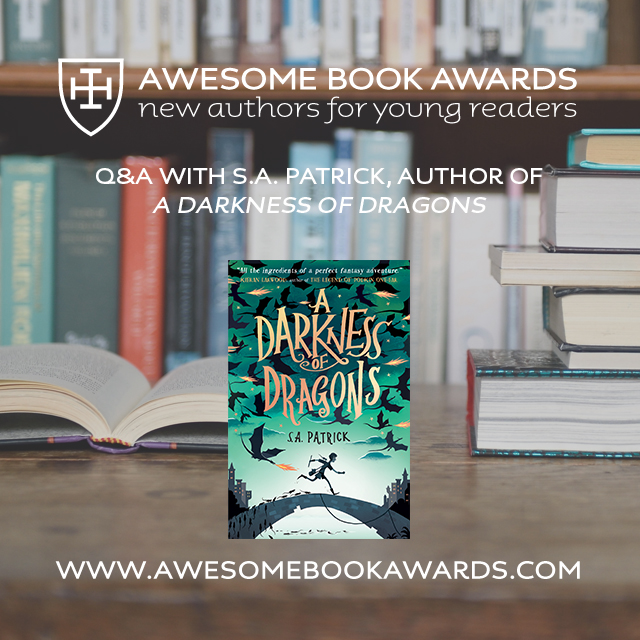 Where did you write A Darkness of Dragons?

I wrote it at a desk in the corner of our garage, surrounded by more spiders than I like to think about.

I’d just got my dream job as a programmer in a computer game company, and was trying to come up with game ideas to suggest to the boss. Music games like Guitar Hero were a big thing at the time, so I was thinking about music-related themes and settled on the Pied Piper story. My idea was that you’d play as a trainee Piper in a world full of Pipers, with the Pied Piper being the villain of the game. I started writing about the game setting; within maybe, oh, an hour, I’d stopped thinking about the game idea and was just obsessed with the world of Pipers.

Piper, Wren and Barver, your three heroes, make a great team. Did you always plan to have a group of three protagonists? Which one is your favourite and why?

I didn’t plan to have three main heroes, it just happened that way and clicked into place. I don’t have a favourite, though — if I tried to pick one I’d just keeping changing my mind!

Music is a major theme within your book. Do you play a musical instrument, the pipes, perhaps?  What music do you like to listen to and do you write with music playing in the background?

I love making music, but I can’t play an instrument. I use a computer with a MIDI keyboard, and have fun plinking and plonking, making little tracks, sometimes based on things I’m writing. Then I pretend it’s part of the movie soundtrack…

I can’t write and listen to music at the same time, but I find it easier to block out distractions if I listen to the sounds of the ocean.

How long did it take you to write A Darkness of Dragons?

Depending on how you look at it, either one year, or 17!

When I first had the idea, waaay back in 2000, I spent a few years messing around with the story, and ended up with half a book and no clue how to progress. Then I got side-tracked as I began another book, which resulted in my first published novel Reviver, a horror novel for adults. When I finally went back to the world of Patch, Wren and Barver, I started more-or-less from scratch. From that point it took a year to write, but it was 17 years since I’d actually begun.

What does a day in the life of Seth Patrick look like when you’re writing?

I have a full time job, so my writing day starts after I get home, have a bite to eat, and head out to the garage. If things go well I’ll stay out there for up to four hours, but if I’ve been out for more than half an hour and the words aren’t coming I call it a day.

Inquisitive, and lost in permanent daydreams. I still am.

I don’t think I had a favourite. My first big reading frenzy was driven by the Doctor Who books, which I couldn’t get enough of, and one of those was signed by Tom Baker, the actor who played the Doctor when I was a child. That was certainly my most prized book.

Maths! Not all of it, by any means — I find actual calculation a slog and I struggle with it. At heart, though, maths is about pattern and structure, and seeing how things behave and fit together. That fascinates me. It’s why I love computer programming, which is really a kind of living maths — you can piece together bits of mathematics to create almost anything. It’s like sorcery.

I’m not reading anything at the moment! I’m hard at work finishing the sequel to A Darkness of Dragons, and when I’m in that mode I find myself starting to edit whatever I’m reading, which is no way to enjoy a book. I have a few things ready to go when I’m done, and first will be The Girl Who Speaks Bear.

I’m lucky to be able to meet authors all the time, but meeting an author as a fan would be so stressful! I’d clam up, definitely. I met Terry Pratchett once and didn’t say a single word, so maybe I’d go back in time and actually say hello.

All I want to do is write a book that captures the reader and transports them into the world of the book, so the most important message for a reader to take away is: reading is fun…more please!

Get your story across, and make sure you enjoy yourself. Don’t put pressure on what you write, because the biggest secret in writing is simple: editing! I don’t think any writing I did when I was young went through an editing stage. I’d write my first attempt, and that was it. If I read it again later, when I saw bits that didn’t work very well I’d think ‘I’m rubbish at this.’

So if you want to be a writer, instead of settling for your first attempt, read it again and tweak it to make it better. You can change a lot, or just the tiniest amount, as long as it improves. Repeat this as often as you like; giving yourself a gap each time, of a few days or longer, helps you see it with fresh eyes.

I promise you, every writer knows that their first attempt shouldn’t be judged harshly. It’s just the beginning — like creating the clay that you’ll shape later.