A new year and a new book, namely Running on the Roof of the World by Jess Butterworth. I downloaded the mandala colouring page available on Jess’s website, which mirrors the beginning of each chapter in the book and each book club member started their own as they arrived and have continued to colour over the following weeks whilst discussions have been taking place. A few of the girls commented that if they had their own copy of the book they would probably colour in the book too.

My first juncture was to provide an atlas so we could ascertain exactly where this book takes place, which I feel is important for the children to know as it helps put the story in context as it is a world away from Cranleigh! Of course the first surprise was that looking in the index for Tibet is not straightforward, and immediately links to the beginning of the book and the Chinese invasion. We not only identified Tibet, India, Nepal and China and the site of the Himalayas, but also where this region is on the world map. The title of the book comes into its own as the pupils begin to acknowledge the landscape, climate and physical features of the region and subsequently the journey Tash and Sam have to take.

Echoing the first chapters also led to a wonderful discussion of the Dalai Lama. I had researched the background of the current 14th Dalai Lama from his birth and his recognition at two years old as the reincarnation of the previous Dalai Lama, and to his exile in 1959. The pupils were fascinated about how he came to be chosen and the signs the Tibetan government used to track him down, the photos of him as a child and the education he received according to tradition.

The pupils were surprised and delighted to find out that the Dalai Lama is on twitter and I shared some of his tweets:

Our visit to this planet is short, so we should use our time meaningfully, which we can do by helping others wherever possible. And if we cannot help others, at least we should try not to create pain and suffering for them.

This led me on to refer to the line at the start of the book ‘To everyone who has ever felt too small to make a difference’. Following a frank and honest discussion, without exception, all the book club members could recall an instance where they felt this and I highlighted Jess’s use of the word ‘everyone’ when she could perhaps have used ‘anyone.’ 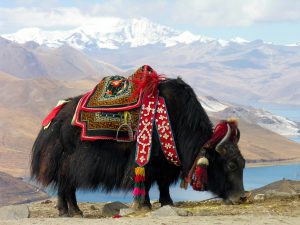 When discussing the characters in the book and namely Eve, it is a good idea to have images of a yak at hand as it is not an animal that many youngsters are familiar with. They are surprised by its size and the fact it has a lung capacity three times that of other cattle, which again relates to the geography of its habitat. As always, the children surprise me and I must admit I had not related Eve’s name to Everest! Doh!

There is so much to talk about with this novel; the author’s love of the region emanates from the story and leaves a lasting impression on the reader. I, for one, cannot wait to meet Jess Butterworth at the ceremony in May and hear more about her travels. I know my book club feel the same way.

There are some fantastic Teachers’ Notes on Jess’s website made available by Hachette Schools, which you can adapt to suit your own personal use. I am limited to half an hour once a week, so barely scrape the surface, but with these resources a class could very easily study this book in detail over quite a few weeks.